From July 5th to 9th, 2015 haute couture houses unveiled their fall-winter 2015-16 collections during Paris Fashion Week. High jewelry houses presented their new collections on the sidelines. Luxury jewelry designers also took advantage of this creative atmosphere that reigned over the French capital at the beginning of July. As haute couture to haute joaillerie there is only one step and in addition some houses have always maintained close links with the world of fashion.

Mellerio House is not his first collaboration but the latter, between the youngest accredited member of the Union House of Haute Couture and the oldest House of Jewelry in the world is unprecedented. Fashion designer Alexandre Vauthier has dusted the stock of emeralds by placing them as a common thread in this elegant and graphic collection. He designed four pieces of Haute Joaillerie (ring, earrings, bracelet and necklace) and three pieces of jewelery (ring, earrings and pendant). 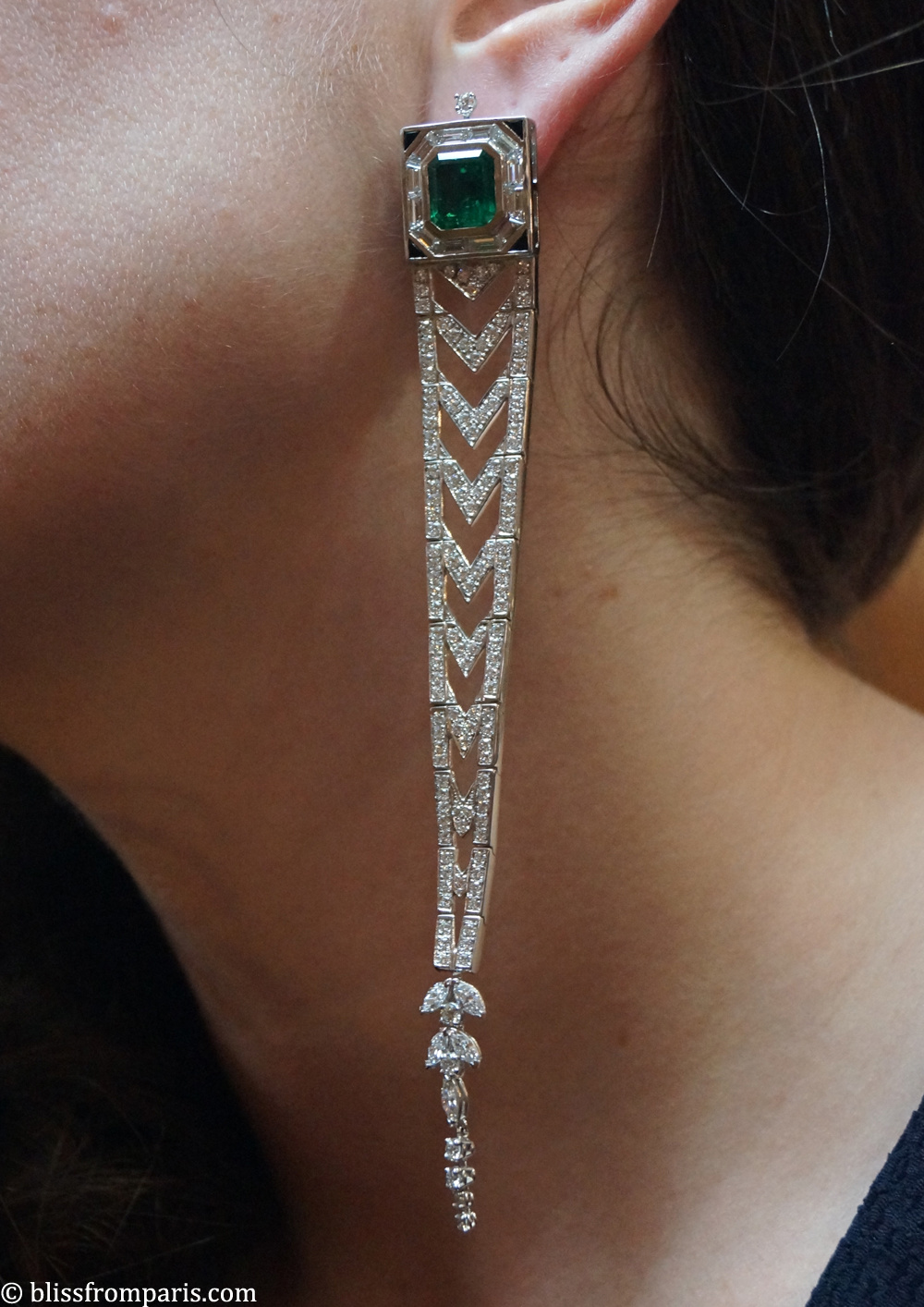 Chanel invited me to Paris Descartes University to discover "The Talismans of Chanel". The staging performed for the occasion deserved the move and the magnificent games of lights and sounds sublimated jewels sometimes revealed, sometimes hidden. These magical jewels that protect the wearer, are an invitation to travel. The quadrilobe pattern was chosen as the leitmotif of this collection. The talisman is a precious protection that is sublimated by a diamond, a pearl of Japanese culture, sapphires, multicolored lacquer and enamel 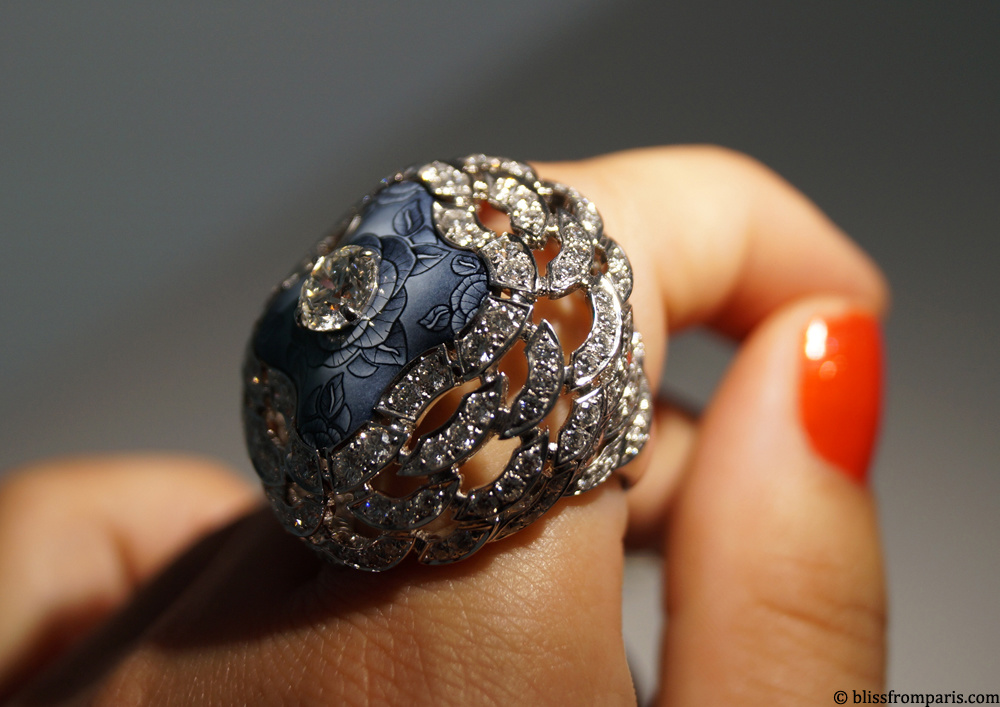 In the historic salons of the Place Vendôme, Boucheron presented the collection "Blue Jodhpur" placed under the high patronage of his highness Gaj Singhji II, the current Maharajah of Jodhpur. Since its creation, the jewelery house has had a privileged relationship with India either to look for quality gems there or to create exceptional jewelery for Indian customers. This time, the house boldly took up the creative challenge using unusual materials such as Indian marble, the same material used in the construction of the Taj Mahal or the sand of the Tahar Desert that was used for the first time in high jewelery. Artistic director Claire Choisne needed only one color, the typical blue of Jodhpur to accurately and passionately express her vision of today's India through this remarkable collection of high jewelry to be cut of breath and to fall in love at first sight. 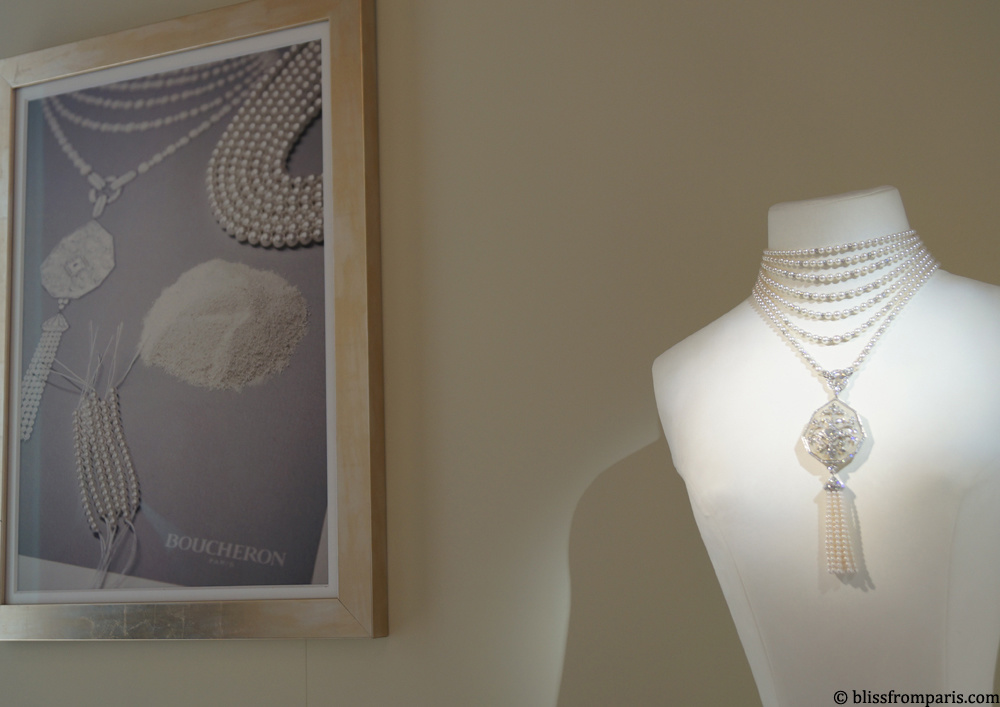 The Brazilian jeweler, H.Stern also remains under the spell of India. The art director, Roberto Stern, was inspired by the wealth of Maharajas jewelry for the new "Antique" necklace of fine jewelry. The beautiful rose gold jewel is composed of 289 diamonds of different sizes - shiny, shuttles, pear, emeralds and antique - weighs a total of 67 carats, evokes India in all its splendor. 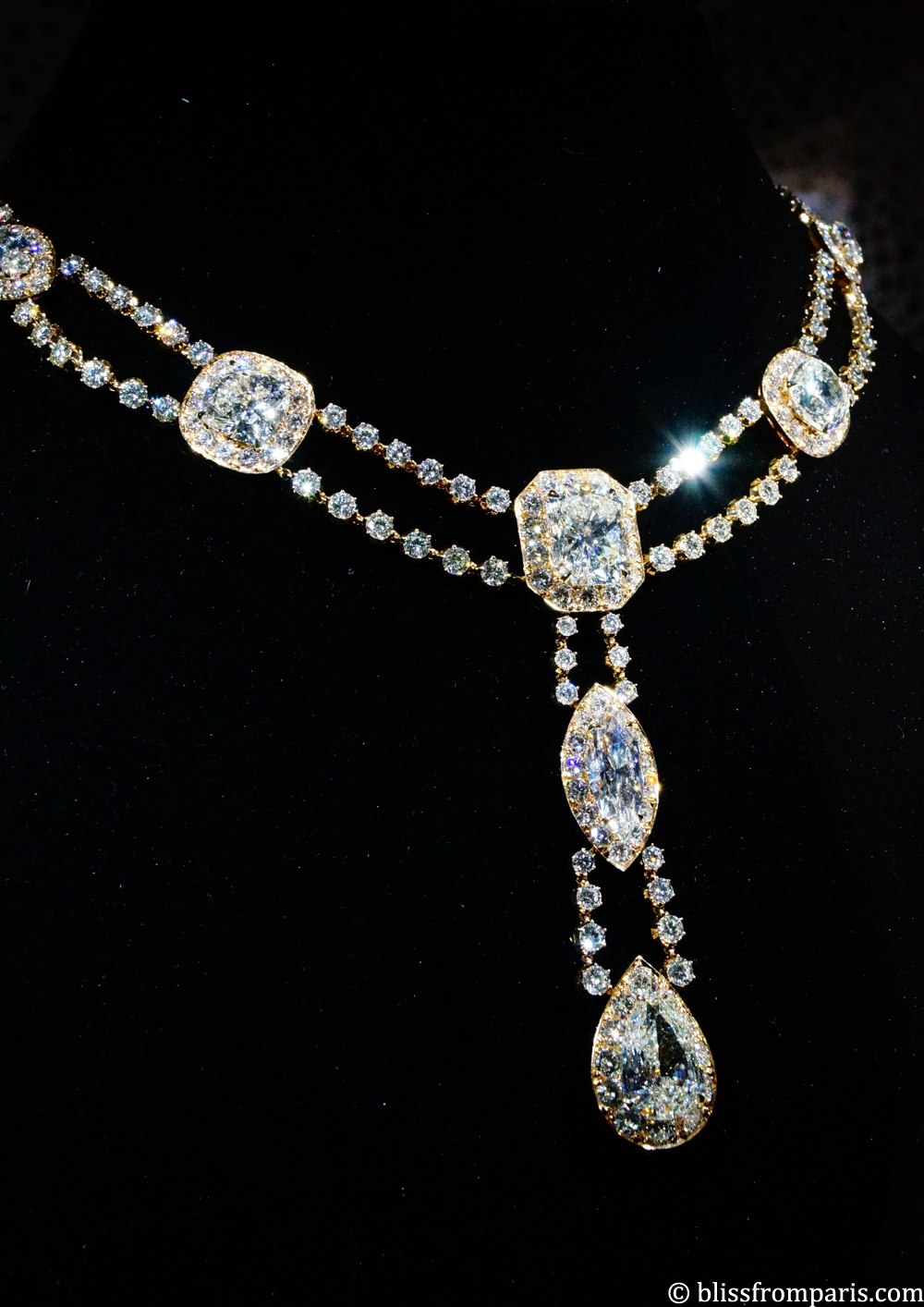 I also took the opportunity to take a tour of Valery Demure's showroom to see the novelties of his protégés. Delfina Delettrez has signed the new fine jewelry collection Earclipse which marks the return of the double earrings. Noor Fares presented the Atelier Mystique collection, whose jewels were made in Parisian workshops. The launch of the new luxury jewelry brand, Kova with graphic designs, also caught my attention. During this haute couture week, the creative director of Gemmyo, Fanny Boucher unveiled her new engagement ring collection "The Wild Bride". I stopped by Paulette for the presentation of revisited classics and unique pieces with beautiful sapphires, spinels and opals. 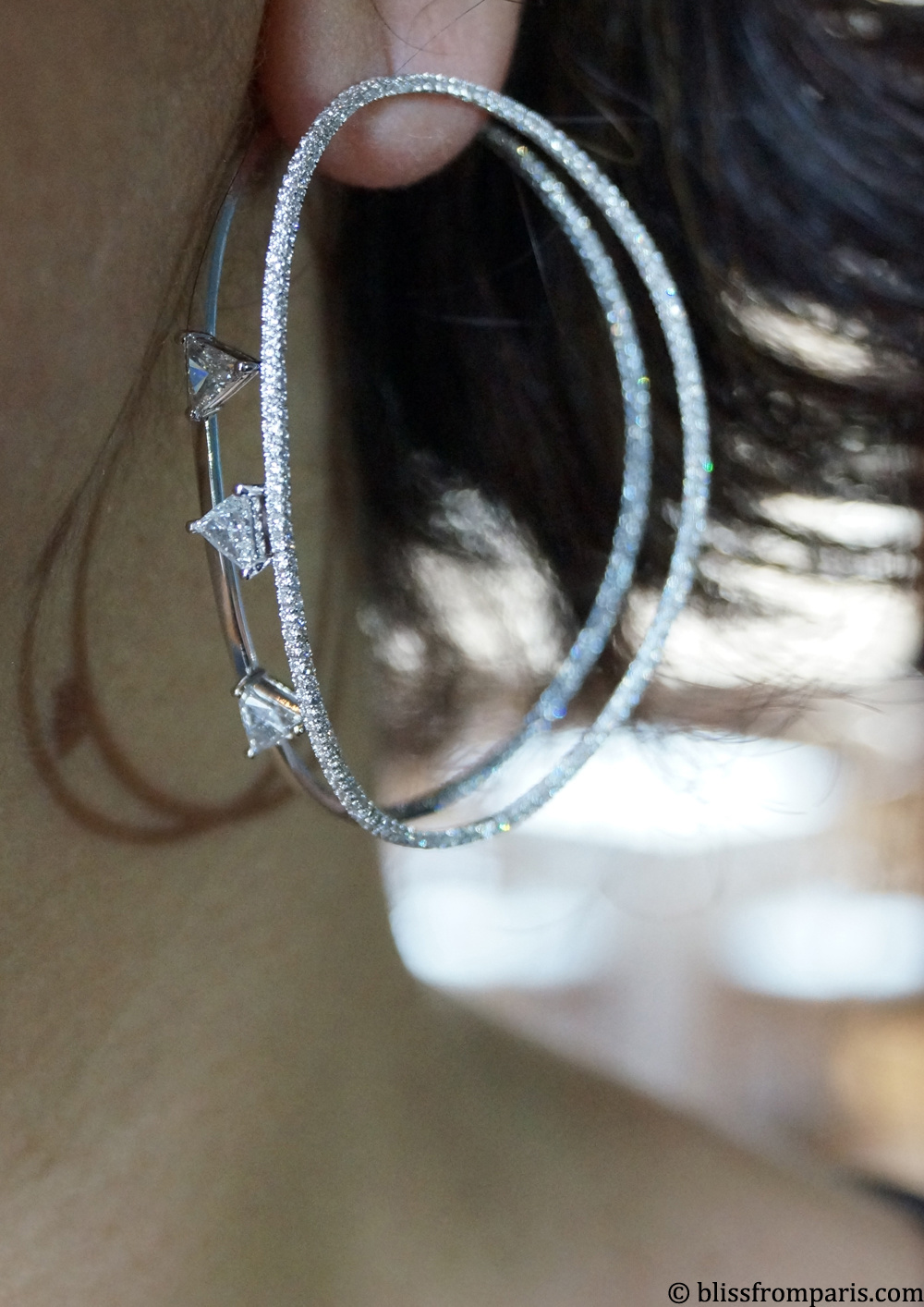 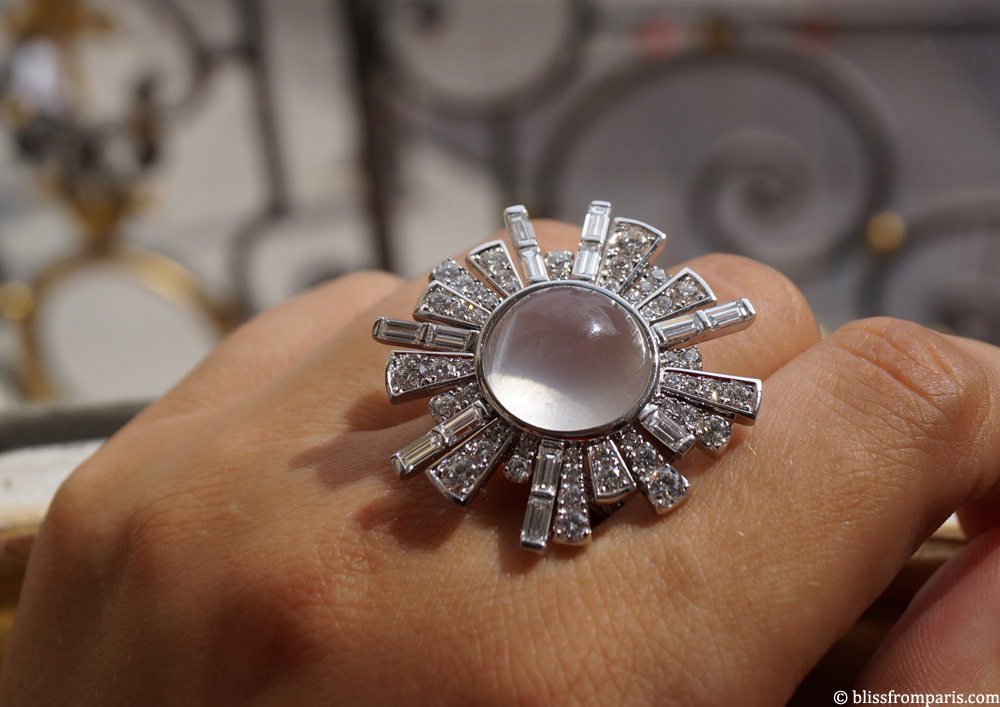 For Masterpieces 2015 from Tiffany & Co., Design Director Francesca Amfitheatrof focused on diamonds in this modern, sleek and geometric collection. It is inspired by 1940-1960 fashion and Hollywood Regency art deco by creating glamorous and elegant jewelry. Black Onyx blends perfectly with different diamond sizes for ultimate chic. 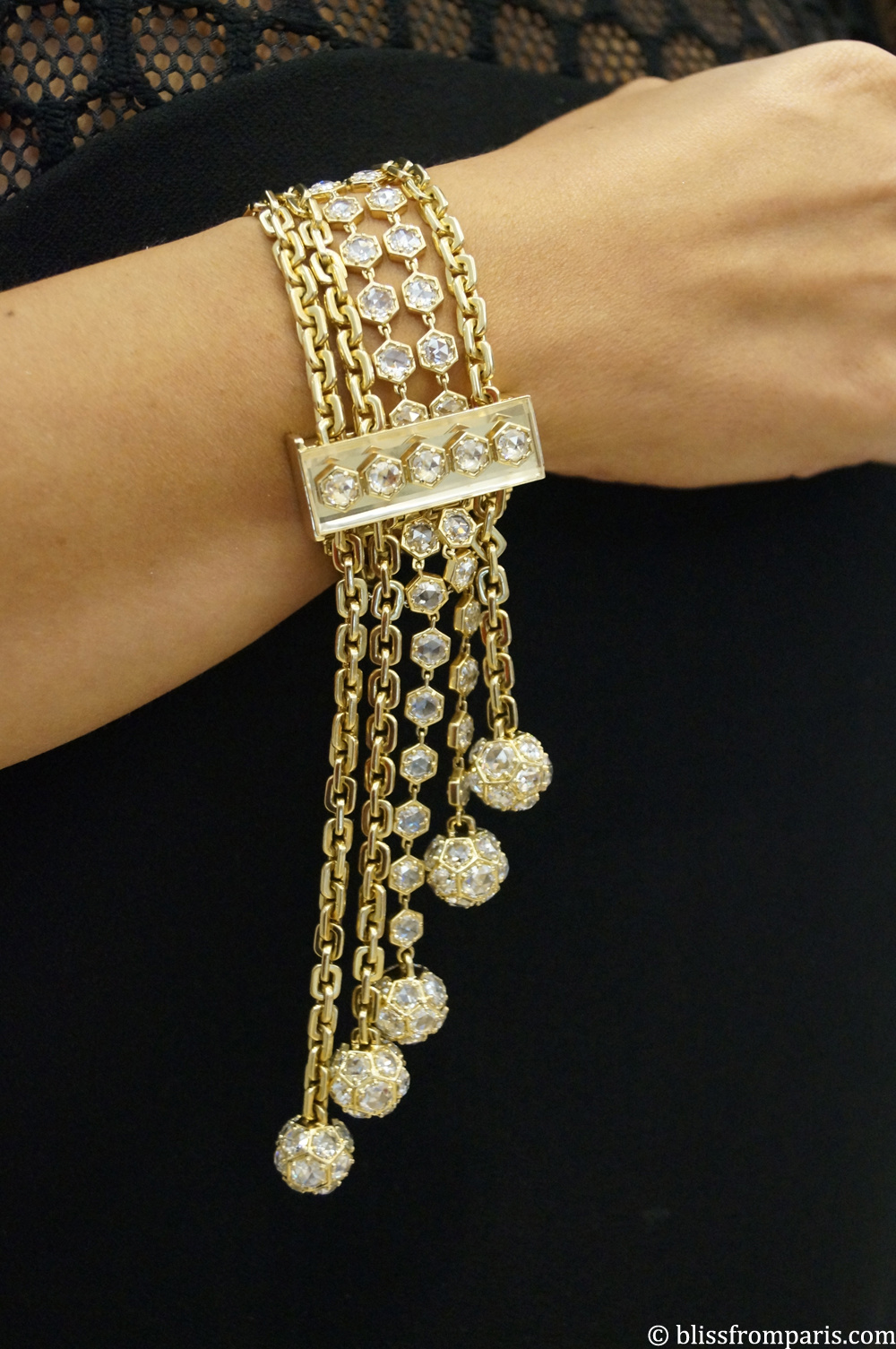 Finally, the Italian house Damiani which will re-open soon on Paris was keen to present its novelties. I was pleasantly surprised by colorful stingray leather bracelets adorned with animal motifs that turn into a brooch in the blink of an eye. The necklace and the ring in fleur-de-lis with petals paved with diamond and black diamonds in the center of emeralds shaped marquises, are also part of my favorites of this last paris haute couture week 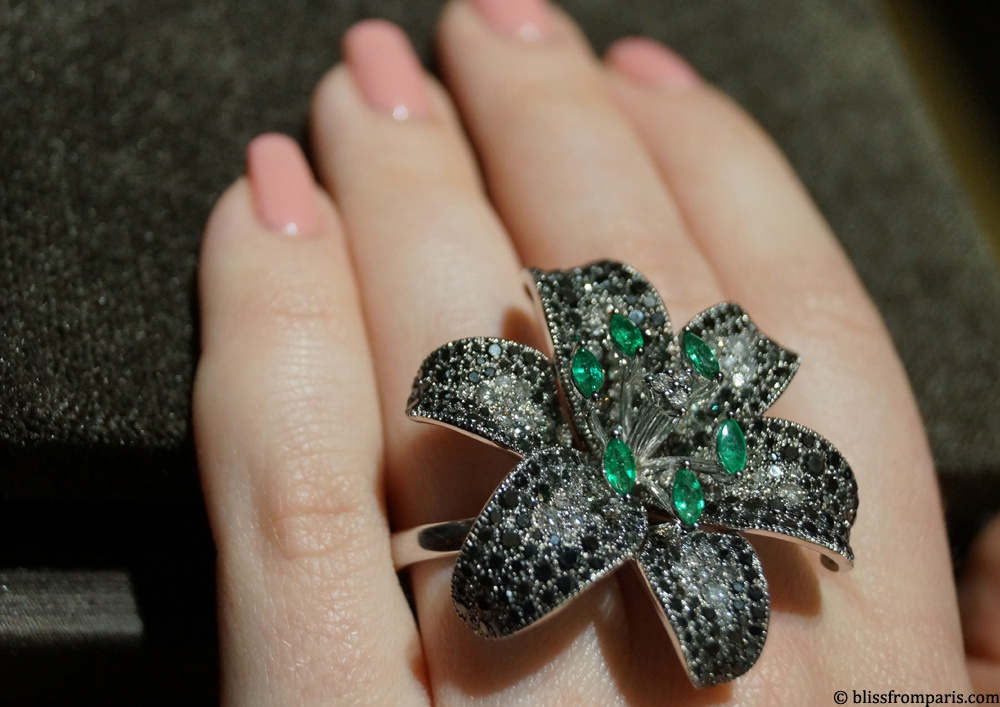 The frenzy will resume with the next fashion shows that begin Sunday, January 24, 2016 to present the new collections Spring-Summer 2016. By then, I wish everyone a great summer.